While most retail investors worry about whether they will have enough money for retirement, Goss spends his time helping ultra-high-net-worth families trying to preserve, grow and transfer their wealth across multiple generations. To achieve this, he has to take a much broader view of economic history than most institutional investors, a process that involves factoring in the potential for unforeseen, catastrophic risk. These are the Black Swan events made famous by Lebanese-American statistician, investor and author Nassim Nicholas Taleb in his book The Black Swan.
“When you're investing on behalf of ultra-high-net-worth families who have already accumulated substantial capital, the focus is more on preserving the real value of wealth and ensuring its effective transfer to the next generation. To do that successfully, you have to have a very strong focus on risk management, which forces you to factor in the possibility of low probability, high-impact events that can have a devastating impact on family wealth."

Goss founded Genera Capital as a multifamily office in 2016 after two decades at Investec, the last six of which were spent heading up its SA wealth management unit. The company now invests on behalf of more than 30 ultra-high-net-worth families, the majority of whom hail from SA, which it defines as those with at least $10m in investable assets. AfrAsia Bank's Africa Wealth Report 2021 says there are about 1,930 individuals in SA with net assets of $10m or more.
One of Genera Capital's key focus areas is helping its investors avoid the so-called "third-generation curse", the oft-quoted aphorism that wealthy families typically lose their wealth within three generations. A study of 3,200 families by US wealth consultancy Williams Group found that 70% of high-net-worth families lose their wealth by the second generation and 90% lose it by the third.

While that's often due to poor stewardship, it's also a symptom of protecting wealth from the impact of seminal historical events being no easy feat. From the French Revolution to Weimar Germany, wealth has ebbed and flowed with the shifting tides of socioeconomic and political history.

Goss cites the example of Zimbabwe and recalls the comment of someone whose wealth was affected by the country's economic collapse in the wake of its disastrous land seizures in the early 2000s.
"You don't understand risk until you've seen your cash, which you thought was your safest asset, go to zero. When you're planning across multiple generations you have to factor in the events that everyone else is discounting."
To illustrate his point, Goss reveals a diagram on risk-balanced asset allocation across four quadrants depicting various combinations of future economic growth and inflation surprises (see diagram). The top left quadrant indicates stagflation, the uncomfortable mix of high inflation and low economic growth. The lower left quadrant shows the recessionary conditions of lower growth and lower inflation, while higher inflation and higher growth are characteristic of a boom. Benign economic conditions are marked by higher growth and lower than-expected inflation. 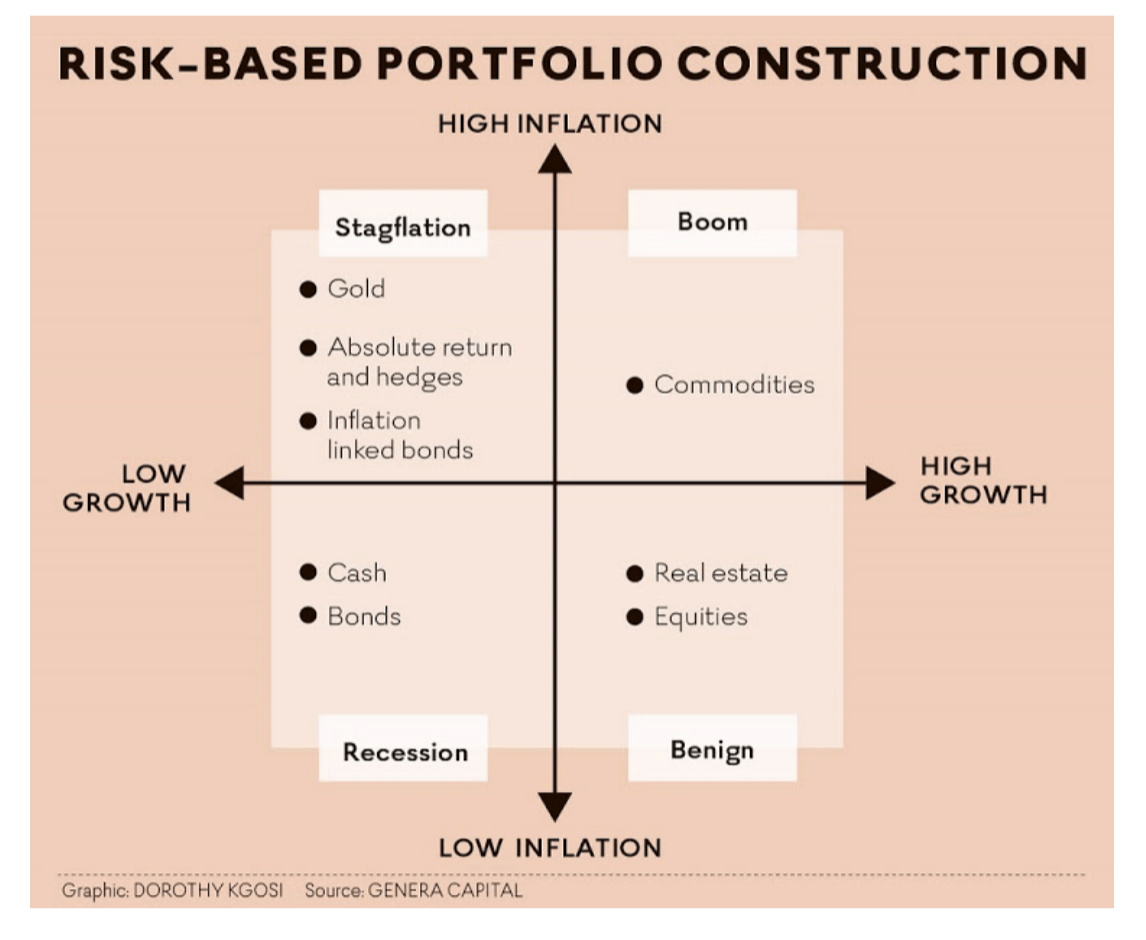 "For the last 40 years post the inflationary shocks of the seventies, most people have known only mild booms followed by mild recessions. The assumption is that the next 40 years will be the same, but you shouldn't just assume that will hold. History shows that when countries start running wartime deficits, like the US is right now, currency debasement and high inflation may follow in unanticipated ways."
Goss says that's where careful asset allocation and diversification become critical to wealth preservation, a strategy he says must go beyond the typical split of 70% equity positioning with the remaining 30% of portfolios allocated to real estate, credit, bonds and cash. To protect against stagflation or hyperinflation, one has to incorporate meaningful allocations to assets like physical gold, commodities and real return hedges such as inflation-linked bonds.
"To protect wealth across generations you have to imagine that the seemingly unimaginable could happen. A hundred years ago nobody thought the British Empire would collapse and the mighty pound would be usurped by the dollar, yet that's exactly what transpired."
New Appointment Announcement
Genera Capital welcomes global investment specialist Dr Adrian Saville to its team
Johannesburg, 12 April 2021: Genera Capital, an independent, multi-family investment office, is proud to announce the appointment of global investment specialist, Dr Adrian Saville, to its business. Adrian will be based at the company’s office in Johannesburg and, as part of his broader engagement within the business and its investors, will focus on the efficient implementation of its specialist portfolios.
Raymond Goss, CEO of Genera Capital, says:
“As a boutique, multi-family investment firm, we carefully manage our growth. We are delighted at the opportunity to work with Adrian whose entrepreneurial flair and passion for financial markets make him an obvious fit for the business and the families we represent. I can’t overstate the importance of experience in financial markets, particularly for us, as we partner with a sophisticated investor with a global footprint. Having Adrian’s voice at the table adds to the depth of expertise we have when it comes to public and private capital markets.”
Saville has been a successful entrepreneur and investment manager in the financial services sector for over 25 years. His passion for financial markets and the development of people, as demonstrated by his professorship at the Gordon Institute of Business Science, are well placed to make him an integral part of the Genera Capital team. He has been a positive voice for development in South Africa which is evident in his media activity, research and engagement in public policy.
In commenting on joining Genera Capital, Saville notes:
“The quality and depth of the Genera Capital team, its holistic investor focus and approach to investment management sets the business apart. Market evidence speaks loudly on this point. I am energised by the opportunity to leverage my skills and work with a team that is intently focused on delivering for the key stakeholder: the investor. Genera Capital’s philosophy of protecting and steadily compounding capital for its investors resonates with me, and I look forward to the exciting prospect of working with the team.”
Saville’s appointment is effective immediately.

New Appointment Announcement
Genera Capital welcomes alternative asset specialist Kathleen Danoher
Johannesburg, 10 May 2021: In line with our focus on creating bespoke and holistic investment solutions, as well as our ongoing commitment to invest in the depth of our specialist listed and alternative capital markets team, we welcome Kathleen Danoher who will partner as a Juristic Representative of Genera Capital.
During her career, Kathleen has gained significant global alternative investment experience. Kathleen will deliver and monitor suitable alternative investments and separately managed accounts for the families we partner. This is a natural continuation of our holistic investment offering where we have successfully provided access to several select opportunities alongside our risk-balanced portfolios. We believe that the targeted alpha from these opportunities offers a valuable uncorrelated return stream. As always, the careful selection of the right opportunities requires focus and a depth of expertise and plays perfectly to Kathleen’s experience in this regard.